It’s hard for me to find words to describe Lekki’s journey with DAMY Health. Reading her words below brings me joy and makes me cry at the same time. This beautiful woman represents possibility. She has overcome so much and has been so diligent in her commitment to finding health it just makes my heart smile!

To say I’m proud is an understatement. When I created DAMY Health I dreamt of helping women like Lekki. Lekki used the Bikini Body Program and embodied everything DAMY Health is. She makes DAMY Health proud. This is why DAMY Health is.

Lekki – Just being with you on your journey and reading it in your words ending with the glowing photo of you now just makes me so happy! It really brings tears to my eyes and joy into my heart just to know that I’ve had an ounce to do with your journey. I’m so grateful for you, so proud of you and I’m so excited for this next phase of your life!

Thank you from the bottom of my heart.

Lekki’s Bikini Body Success Story – “I felt utterly empowered to live a healthy life, and empowered to make good decisions about eating/exercising behaviours on my own.”

I came to DAMY an emotional and physical wreck. To start, I had a 8-year history of bulimia (on and off for periods of up to 2 years) but even when that was under control, I had no idea how to look after my body. I think it is a familiar story: trying every diet under the sun, but worse: getting addicted to quick fixes.

I cringe when I hit my lowest point: The Master Cleanse – 10 days of morning salt water ‘flushes’, then nothing but maple syrup, cayenne pepper, water and lemon juice all day, followed by a laxative at night. My husband begged me to come off it when my hands and lips literally turned blue. I never ate enough, but was obsessed with exercising: up to 3 hours a day. I maintained a low BMI and thought I was doing quite well.

In March 2011 my boyfriend proposed to me, and we planned a wedding for June: 3 months’ time. Cue a low-carb extreme diet, in which I replaced 2 meals a day with shakes. While trying to keep up 4 days weights and 3-4 days cardio. Good grief. I made the wedding, was a size 2-4 and thought things were great. After the wedding I ballooned. Seriously. I don’t know if I had messed up my metabolism, messed up my psychology or what, but by the time we went to the UK for our honeymoon in September 2011, I had gone to a size 8+. Not terrible, but not what I wanted to be. I felt out of control and desperate, and somehow something clicked: these crash or extreme diets were not working.

I needed something else, and I needed someone’s help and I needed it badly. I looked around at the options. I thought about Jamie Eason’s 12-week trainer – it looked like a wonderful plan, but so strict – I was worried it would trigger my old behaviors. I eventually picked DAMY because Amy was always posting healthy treats, and even pictures of herself enjoying meals out – it seemed like a plan I could fit into a lifestyle. And she drank wine (occasionally). Yes! I needed my wine 🙂 DAMY seemed a plan that would not be all or nothing.

I signed up to the 12-week best body ever challenge (BBEC) on the bikini plan. I started it the day I came back from the UK (mid-September 2011). Let me say: I am a Scientist working (broadly) in the area of nutrition. I should know what to do. I didn’t. I learned so much with DAMY and Amy’s help.

I watched the weight fall off and I can’t begin to share everything that I learned, but here are some things I did realise:

(1) It has to be REAL food (I eventually even cut out all artificial sweeteners)
(2) How to eat off plan properly (I hate the word ‘cheat’ now): how not to binge, how to plan it, how to select delicious but healthier options
(3) Not to fear carbs!! I ate them plentifully, but ate the right ones
(4) Not to freak out if the scale didn’t move, but when to stay on course and when to change things
(5) How not to judge myself entirely by my weight loss – a bad week does not = a bad person!
(6) my own body swings and rhythms – who would have thought that my monthly bloat could begin 10 days before I was due?
(7) Rest days are OK, and exercise does not have to take up a lot of time.

Amy was wonderful: she encouraged me every week without fail, and utterly personalized the program. Whenever she made changes she would follow up for 3 days to see how they worked. Amy was also no push-over (we has opposing views on the amount of vegetables were ‘necessary’ – she was tough!).

My husband loved how chilled I was, how delicious the food I was making was (he cannot get enough of the DAMY lasagna nor the pumpkin bake) and how we could eat together again. I loved the program and was aiming to win BBEC! But, 8 weeks into it, I had to back off. It was getting to be Christmas time, and suddenly I was so happy and chilled, winning BBEC and defining myself by my body gains / losses was no longer who I was. Great for some people who can do that! But not me, knowing my history I had to be careful. I also wanted to see if I had really learned one final thing: how to enjoy the party season, and the meals, and the pot lucks, in a healthful way: for mind and body. I wanted to go off plan sometimes, and figure how to work this in to my everyday life. I had a blast, and was so chilled.

So, I didn’t enter BBEC anymore (because I was not 100% ‘on plan’ although I was when there wasn’t an event, and felt I was cheating the challenge), but I focused on sustaining happy, healthy habits. I actually lost a bit of weight and even toned up more on the last 4 weeks (bonus)! At the end of the BBEC period (Jan 1st 2012) I was so happy with my body and mind. Back to a size 2-4, but no longer skinny fat, and I felt utterly empowered to live a healthy life, and empowered to make good decisions about eating / exercising behaviours on my own. 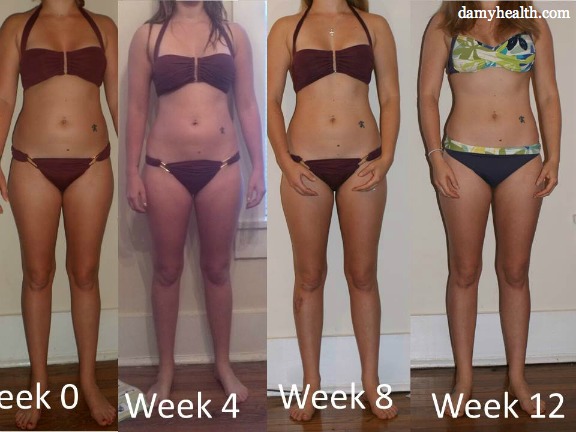 January 2012 – mid February was tough for me: I was traveling 3 out of 4 months, and was on job interviews, where I had to be sociable and ‘fit in’ so I really wasn’t that much in control of my food. I did retain my healthy habits though: exercising where I could, making healthier choices, enjoying less healthy choices without guilt when they were the only option, never binging, never starving. I finished January either the same weight or 1 lb more (which was pretty good for endless dinners, and drinks receptions) and decided to go back to DAMY bikini plan (the first 4 weeks) as soon as I had completed another goal: finishing Tough Mudder. 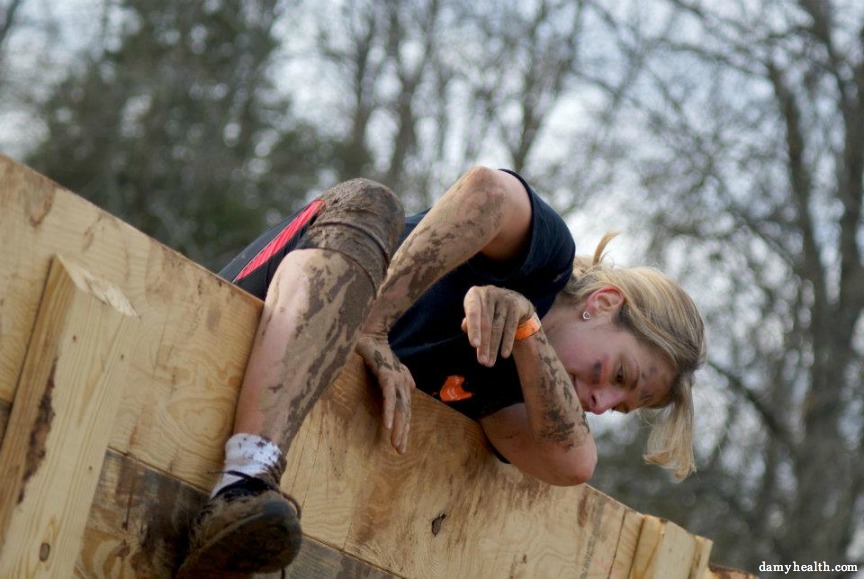 I completed every obstacle on Tough Mudder, and ran the full 1/2 marathon, on Feb 11th 2012 (the only woman in my group to do so!!) and resolved to pick up DAMY. I did, and on February 24th 2012 another dream came true: I found out that I was pregnant!!!! (Ha! On February 17th I also found out that I landed my dream job). It was the first month we had ‘tried’ and so DAMY obviously makes you very healthy indeed!

I stuck to DAMY for the baby, and lost 2 lbs, but then horrendous morning sickness and food aversions struck and I really couldn’t – but again, I stuck to the good DAMY habits of exercising when I could, and focusing on small regular meals (the quality of the food did go out of the window as I was unable to eat any protein or veggies and keep them down), but I had a healthy end to the first trimester: 3 lbs weight gain. I am now 14 weeks pregnant, the sickness is clearing, and I am back on DAMY, with the only changes being a larger meal 4 and an added serving of carbs for dinner. I am not perfect, as sometimes I still get sick (or get INSANE cravings) but I am doing well. And so happy. I don’t think I could have approached pregnancy so healthfully (again: in body and mind) without DAMY. 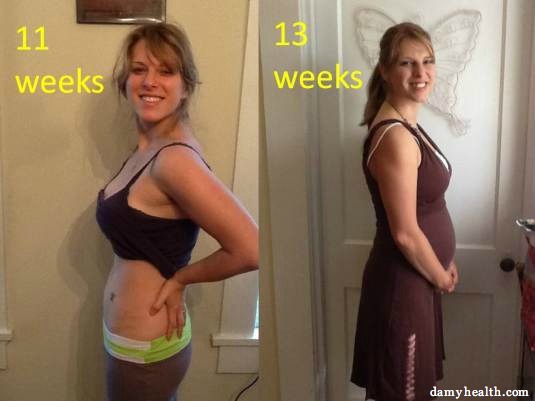 So from me, my husband and my little boy (still safe inside me): Thank you AMY!!! I will be following your general plan and will be properly back in 7 months time I am sure!! And I would complete a BBEC in full then too!

(P.S. Amy: this is why I ‘fell off’ the DAMY radar: I didn’t want to tell anyone about the pregnancy until 12 weeks had gone: I can be very superstitious, even though I am quite religious!).

Amy Layne is a Personal Trainer, Holistic Nutritionist and Lifestyle Expert at DAMY Health. She is the creator of the popular DAMY Method Program and world famous Bikini Body Program. To see Amy’s Before and After Photos and DAMY Member Success Stories Click Here. For Amy’s complete story go here!

3) Lose weight naturally & keep it off without struggling

You have Successfully Subscribed!

100% FREE: make sure to check your email & confirm your registration after subscribing.

Lose weight naturally & keep it off without struggling with our free 3 part series. Enter your email below to get started with Key #1 today.

You have successfully subscribed! Simply confirm your email to begin asap.

make sure to check your email & confirm your registration after subscribing.

“First of all I need to tell you how blessed I feel that you and DAMY health have become part of my journey. I did the bikini program last spring and have been a lifestyle member ever since. Your advice and notes are so empowering and uplifting. I truly believe that everyone who follows you can feel that your message is genuinely from your heart. Thank you for sharing yourself, your spirit and your knowledge so freely!

You are one step away from KEY #1! Confirm your email to get started asap.